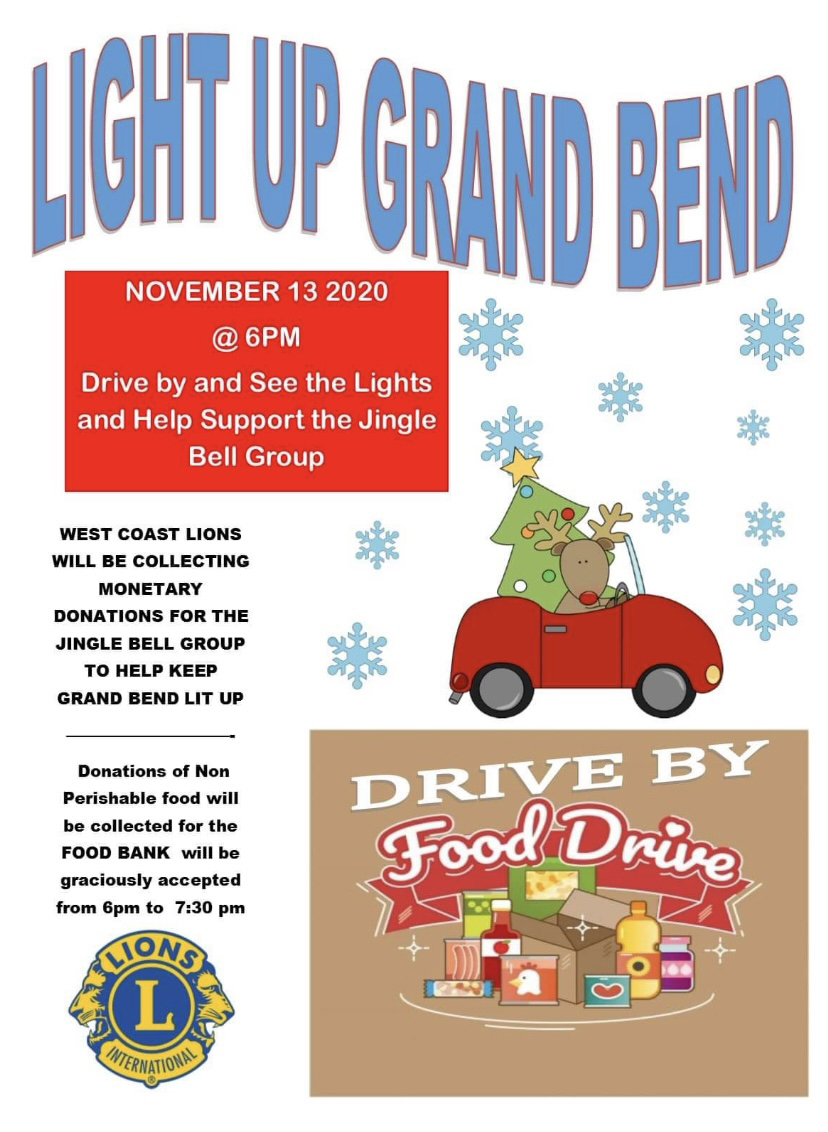 The Jingle Bells Group turns on the lights at Optimist Park Friday, November 13, 2020 at 6 pm. Feel the magic of the holidays as you drive by to enjoy the lit-up trees, holiday figures and decorations.

Mounted by the Lions Club, the drive-by event runs from 6 – 7:30 pm; folks can donate non-perishable food items in support of the Food Bank and can donate funds for the Jingle Bells Group to help keep Grand Bend Lit Up.

Jamie Baldwin, well –known as the Skateboarding Fiddler, will perform from 6 – 7 pm as folks come to the drive-by Lions Club event.

Jamie Baldwin’s singing and fiddling talents will be showcased on Facebook Live. Check out  www.facebook.com/thejinglebellsgroup 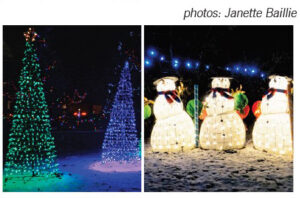 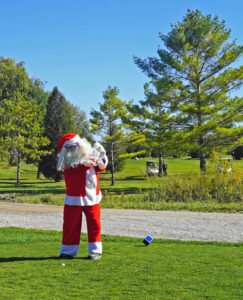 For the past two years, I have been lucky enough to have chance encounters in Grand Bend with the world’s best-known Superhero, the epitome of the seasonal worker, Santa Claus himself. Both times were in summer, so naturally this year I kept my eyes wide open to see if I might once again have the good fortune to chat with him. No such luck!

And near the end of October, I can report that I spied the Claus-man on the golf course at White Squirrel Golf Club. I parked my van next to the bright red Mustang that he had rented for a fall holiday in Grand Bend area.

Santa was gracious as before – telling me that it’s been a tough year at the North Pole, feeling cooped up in a “bubble” with Mrs. Claus and the reindeer; “the critters are all getting pretty testy at not being able to roam about as freely as they want”.

“So the Mrs. and I were warming up one night in front of the fire and made a hasty decision – let’s go south to the shores of Lake Huron and see the fall colours that we’ve heard so much about. We’ve never seen fall colours before – because of course we live way above the tree line year-round. And people often ask me for golf clubs and other golfing paraphernalia for Christmas so I wanted to try the sport to see what folks find so enticing about it.”

Turns out Mrs. Claus was enjoying luncheon on a patio while Santa was golfing. He stood out on the green very brightly, dressed for the cool fall day in his red suit. He was setting a great example for everyone, wearing a face shield – a mask doesn’t come in sizes for a luxurious beard like Santa sports.

I reminded him we had last met when he was following a new passion – art. Parking the paints and easels this year, he was trying out lots of new activities to keep healthy and happy. 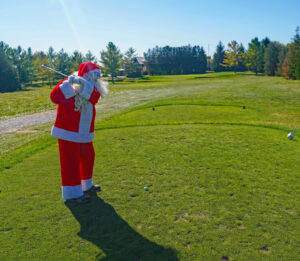 And I got the scoop on the Mustang. Turns out he wanted to see how a hot car that had 460 HP from its 5.0L V-8 engine would perform compared with the reindeer. There was no contest on the ground – the Mustang would win every time. But when the reindeer were airborne, they could circle the globe in a fraction of the time the Mustang would race its way from Ottawa to Winnipeg!

He found some features that he wanted to update his current transportation method. “Those heated seats are amazing! Mrs. Claus’ cheeks are so rosy when she gets all cozy in the car. And that back-up camera! Do you have any idea how tough it is to get the reindeer to back up in unison without barreling into a chimney or Christmas decorations on folks’ roofs?”

I left him by the Mustang, comparing notes with Mrs. Claus on where to explore next.

UPDATE: Santa emailed me once he and the Mrs. got back to the North Pole. They were both bowled over by the brilliant fall colours here – the jury is still out on whether golf will be a new passion. It took a while for Rudolph to get over his snit about Santa cavorting with a Mustang – apparently his red nose was tinged with a bit of green envy until he processed the info that the horse was a car, of course!

The last thing Santa needs is a moody reindeer leading the way on Christmas Eve. If Rudolph gets too hot under his reindeer collar he could overshoot the planet and end up somewhere on the outskirts of the Galaxy.

Something tells me Santa will be this way again next summer or fall for some R& R…and possibly a new hobby. This area is top of his vacation list! 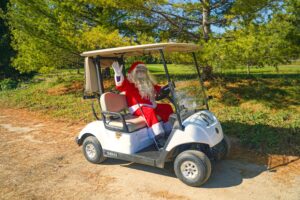 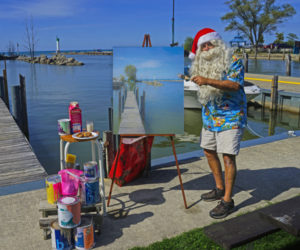 After my success at tracking down Santa on the Main Beach at Grand Bend during his 2018 summer vacation, I searched the area in vain for weeks in July and August this year, looking for the world’s best-known Superhero, the epitome of the seasonal worker, Santa Claus himself.

I was enjoying an early fall morning stroll on River Road – getting some exercise while enjoying my morning coffee when I spied the Claus man at the entrance to the marina. Needless to say I could hardly believe my eyes!

There he was! Dressed in shorts and a bright Hawaiian shirt decorated in a design with selfies of the great man. He was standing before an easel, having almost finished a large painting of the river and Lake with the lighthouse and pier.

Everything Santa does is larger than life, so I shouldn’t have been surprised to see that instead of the usual small palette and brushes, he was using quart and gallon paint tins and large brushes to produce his masterpieces. He worked with great patience, stopping frequently for a sip of milk and a chocolate chip cookie. Apparently they were his muses.

I took a chance and walked right up to him; I introduced myself, although he has known me for decades, since I was a wee girl with a Christmas list that always included a pony. News alert: no pony ever arrived!

He was gracious in answering my blurted-out question about what he was doing painting of all things. Was this a new hobby or something he had been doing for years? He explained that he studied with some of the great European artists – he liked how Rembrandt used light, how Van Gogh used vivid colours, how Monet captured subtle shades of water. It made my head spin, until I realized that of course Mr. Claus had been around for centuries and would have had unimaginable access to the giants of canvas, paint and brush.

Explaining that art has always been incredibly important as a source of centering and recharging in his life, he said he simply parks the sleigh for the whole month of September for some R & R. This year he gifted Mrs. Claus a month-long luxury cruise in Northern Europe; it was a bit of a busman’s holiday since she was going to check out some young reindeer in the northern reaches of Finland. He blew Rudolph’s nose that got redder by the minute when the star sleigh leader learned his master would be out of sight for thirty days – then Santa headed due south to his favourite vacation spot, Grand Bend.

Apparently he has no intention of having an exhibition of his work; the explanation I was given that he feels people would be so anxious to get one of his originals that there could be too much excitement and large, curious crowds. He felt that his hobby would get more attention than his important life’s work of bringing the magic of the holiday season to children of all ages far and wide.

He savoured his last cookie, took a last sip of milk and packed up his painting paraphernalia, loading it carefully into a shiny, bright red pickup. “Love the 420 horsepower on this machine – a far cry from travelling with 9 reindeer. Plus those critters make more annoying comments than a GPS with voice commands when you make a few wrong turns!” Then he winked.

That last comment made me realize just how much the Claus needed this long vacation to rest and rejuvenate for the frantically-busy holiday season looming on the calendar’s horizon.

And just like that, he roared out of sight.

Come check out the fabulous holiday lights, hot chocolate and cider, Jamie Baldwin – the Skateboarding Fiddler, horse-drawn wagon rides and seasonal good cheer! And take a good look at Santa’s waistline – I thought it looked as if he had lost a couple of pounds in that summer photo!

UPDATE: Santa emailed me once he got back to the North Pole to let me know how much he enjoyed the sunny days, the beach and painting scenes of the harbour. His wife was ecstatic to see him and brought him a Finnish souvenir of Sauna Bucket & Ladle, an ideal gift since over 40% of Finns own a sauna. He plans to frame one of his paintings and surprise Mrs. Claus with it on Christmas Eve, just before he climbs into the sleigh, after giving a pep-talk to the reindeer, calming down Rudolph so he doesn’t get super-hyper, overshoots Planet Earth and gets lost in the Milky Way.

Something tells me Santa will be this way again next summer or fall. It’s top of his vacation list!